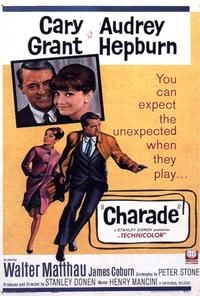 Cary Grant and Audrey Hepburn star in this stylish comedy-thriller directed by Stanley Donen, very much in a Hitchcock vein. Grant plays Peter Joshua, who meets Reggie Lampert (Hepburn) in Paris and later offers to help her when she discovers that her husband has been murdered. After the funeral, Reggie is summoned to the embassy and warned by agent/friend Bartholemew (Walter Matthau) that her late husband helped steal 250,000 dollars during the war and that the rest of the gang is after the money as well. When three of the men who attended her husband's funeral begin to harass her, Reggie goes to Joshua for help, at which time Joshua confesses that his name is actually Alexander Dyle, the brother of a fourth accomplice in the gold theft. The three men from the funeral are revealed to be the three other accomplices in the crime, and though she knows next to nothing of the heist, Reggie is caught in a ring of suspense as she is followed by the shadowy trio, all after the money. Apparently, the only person she can trust is Joshua/Dyle -- until Bartholomew tells Reggie that the fourth accomplice had no brother, and Joshua/Dyle reveals that he is, in fact, a crook named Adam Canfield. Now Reggie doesn't know where to turn. The musical score by Johnny Mercer and Henry Mancini was nominated for an Academy Award.